Oops! Schumer Was For the Military Parade Before He was Against It! (Video) 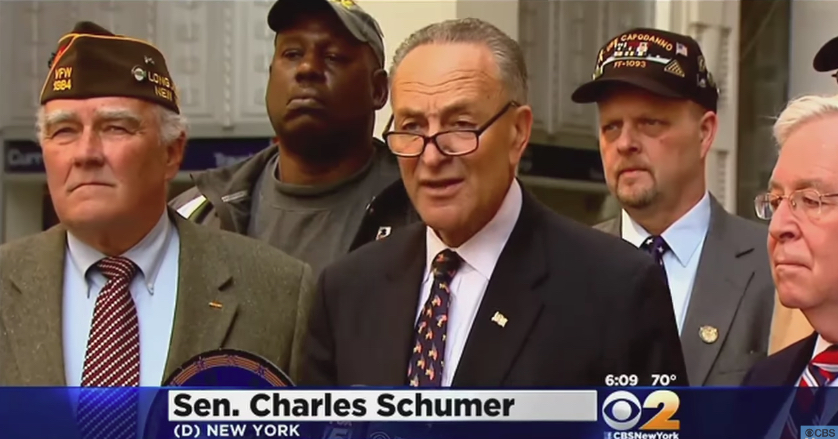 While this isn’t a million laughs, it’s at least worth a derisive guffaw! It seems Chucky Schumer and the Dems have forgotten that we have lived in the digital age for almost two decades now, with videos and sound bites from every possible news presser readily available, thanks to Al Gore’s information highway.

The Left — all the Progressives, MSNBC, CNN, late night talk show hosts, etc. — are stroking out over Trump’s suggestion of maybe having a military parade. SecDef James Mattis told reporters that Trump’s idea was a result of his “respect and affection” for the military, and emphasized that it was merely thought being floated, not a done deal.

American exceptionalism is rooted in the power of our democratic ideals, not of our military hardware
I served for the ideal of America not a wannabe dictator. https://t.co/vjpI03CQhJ

California Rep. (D) Ted Lieu (and we honor him for his service in the USAF) tweeted:

Minnesota Rep. (D) Tim Walz didn’t mince words, calling a military parade “the stupidest thing I’ve ever heard” on MSNBC (that channel of all truth and wisdom for sure) The Last Word with  Lawrence O’Donnell:

WATCH: "That's the stupidest thing I've ever heard."@RepTimWalz says there's "absolutely no justification" for the Pentagon spending dollars on a military parade at Trump's request — instead, save the money and give the people of the armed forces a raise. #LastWord pic.twitter.com/hslDrt7ErV

Democratic Rep. Jackie Speier of California, never one to stay silent when given the opportunity to heckle Trump chimed in:

I was stunned by it to be quite honest. I mean, we have a Napoleon in the making here.

Check your cards! Who has dictator bingo? I was close, I had rallies and attack the free press, I didn’t have military parade.

This is what we’ve come to expect from The Left and a few pretentious RINOs, absolute perverse dishonor of the presidency and Trump’s character, as opposed to valid disagreement with his policies.

And just as the chorus of blathering Lefties reached a crescendo, this video surfaced with Senator Schumer touting the notion of a Veterans’ (as in military veterans) ticker-tape parade. Oh the bitter irony!