Joe Kennedy III Declares His ‘Generation’ Will Tear Down that Wall! 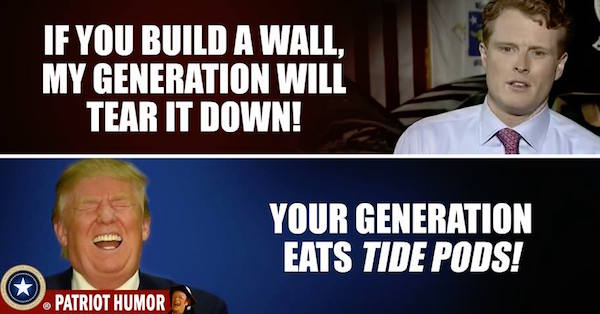 Oh boy. Will the Kennedy clan ever just go away? Joe Kennedy offered up the Dem response to Trump’s State of the Union address.

You remember the State of the Union? That speech where almost every Democrat suffered a cataclysmic paralysis of their face, arm and leg muscles? Dial 911 “We believe there are scores of cadavers in the U.S. House of Representatives Chambers! Please help!”

So what was the Democrat plan to punch back after Trump’s very good rhetoric?

Resurrect a Kennedy! And not just any Kennedy, but the great-nephew of the “Lion of the Senate,” Mister “Sure I left pregnant Mary Jo Kopechne in the car to tread water while I ran for help” Teddy Kennedy, Massachusetts Rep. Joe Kennedy III.

The grandson of Bobby Kennedy and great-grandson of bootlegger and Kennedy patriarch, Joe Kennedy Sr., spoke earnestly to a smallish, but enthusiastic crowd, and threw some big crumbs (hear that, San Fran Nan?) to the furious illegals:

And to all the Dreamers out there watching tonight, let me be absolutely clear: Ustedes son parte de nuestra historia. Vamos a luchar.

Vamos a luchar por ustedes y no nos vamos alejar. You are part of our story. We will fight for you. And we will not walk away.

America, we carry that story on our shoulders. You swarmed to Washington last year to ensure that no parent has to worry if they can afford to save their child’s life. You’ve proudly marched together last weekend — thousands deep — on the streets of Las Vegas and Philadelphia and Nashville.

You sat high atop your mom’s shoulders and held a sign that read, “Build a wall and my generation will tear it down.”

You bravely say, “Me, too.” You steadfastly say, “Black lives matter.” You wade through flood waters, battle hurricanes, brave wildfires and mudslides to save a stranger. You battle your own, quiet battles every single day.

You drag your weary bodies to that extra shift so that your families won’t feel the sting of scarcity. You leave loved ones at home to defend our country overseas or patrol our neighborhoods at night. You serve. You rescue. You help. You heal. That — more than any law or leader, debate or disagreement— that is what drives us towards progress.

Okay Rep. Push One for English…that’s just what you should do. Address America, a nation whose native and official language is English, in another language.

And sorry Joe, but they are not DREAMERS; they are LAW-BREAKERS! Call them what they are: ILLEGAL ALIENS.

Sheesh! Legal Americans have a dream that only legal immigrants who will eagerly assimilate will be allowed into America.

So we legals will support the construction of a wall and extreme vetting and greater border security.

And you Joe iii, with your allusion to Reagan’s great speech at the Brandenburg Gate, you should hush up and grow up. Reagan was talking about a wall built by murderous Communism to keep people imprisoned in a hellish state. Trump is talking about a wall to stop the flow of illegal immigration, drugs, sex trafficking, and new Dem voters. Not the same thing at all.