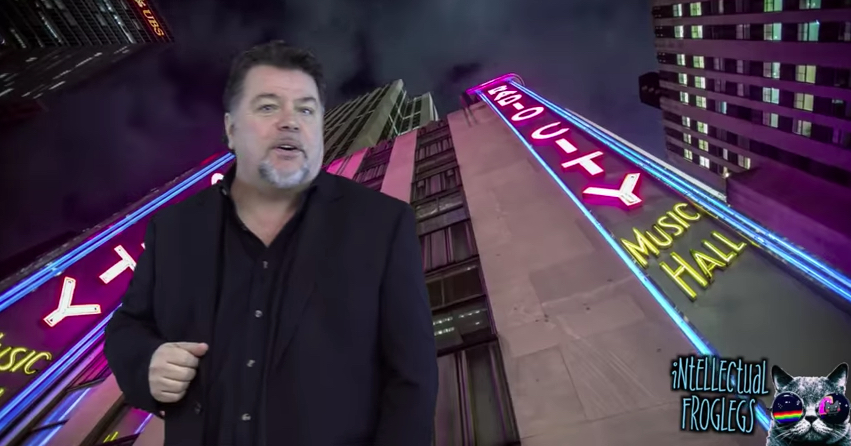 Our good friend, Joe Dan Gorman, after brief hiatus to upgrade old equipment, is back with a new and improved (technically) and predictably hilarious Intellectual Froglegs installment.

If you’re unfamiliar with Joe Dan, a little of his bio from IntellectualFroglegs.com:

When the real estate market collapsed in 2007, in combination with a multi-year custody battle for his son— Joe Dan lost everything. Within a 3 month period, Joe Dan’s Dad died, his son was taken and his livelihood collapsed.

In May of 2008 Joe Dan, almost 50 years of age at the time— moved to his Aunt Jean’s Kansas City basement.  And he could not find a job anywhere…. doing anything, not even working in fast food restaurants.

In 2009, Joe Dan produced his very first video on a laptop and the free Windows Movie Maker software that came with the computer.  “I will follow him” was the title and it hit over 200,000 views.  Soon thereafter, he became a semi-regular on KMBZ AM- Radio in Kansas City…. until he was banned after the station took a liberal slant.

In 2011, Joe Dan who was about to be baptized— was ‘dis-invited’ from his baptism KC church for asking too many questions.  He wrote about that here.

It was shortly after that when Joe Dan said God came into his life via the basement, and just a few months later— in 2012, Joe Dan created Intellectual Froglegs.

In 2013, he was nominated for Video Blogger of the Year at CPAC in Washington DC.

And now… his job is Intellectual Froglegs, where he makes just enough to produce the next episode.

Joe Dan has rejected corporate affiliations that require him to compromise his core Christian beliefs.

UPDATE: Through the grace of God, eight years later Joe Dan was reunited with his son JD in May of 2015. JD moved in with his Dad

If you’ve never watched one of Joe Dan’s IF episodes, you’re in for a fun time — I dare you not to laugh throughout the 29, fast-paced minutes!

Joe Dan combines fantastic photo stills with video and music and moves everything along so the viewer barely stops laughing at one bit of commentary when another moment of snarky hilarity begins.

And as an added treat this month, Tony Branco has a cameo mid-video!

Book mark Joe Dan’s site, IntellectualFroglegs.com, add his YouTube channel to your subscription list, and then pop some corn and get ready to watch 29 minutes of liberal-bashing fun!!

Joe Dan, you truly represent the great American pioneer spirit: you love God and country and won’t let situations get you down. You are a true “rugged individualist” imbued with a rare sense of humor, a perfect combination for commentary off the beaten path!

With permission from Intellectual Froglegs