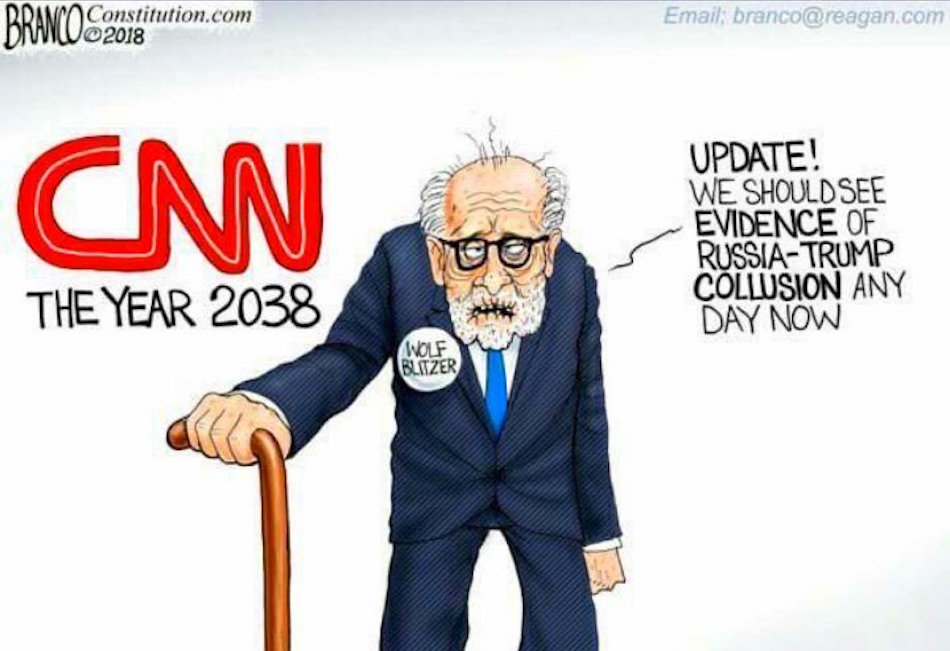 CNN, Cable News Network — golly that sounds innocuous — was founded by über Lefty media mogul Ted Turner (the one-time “Hanoi Hilton” “FTW” Jane Fonda main squeeze) in 1980. Consumers thought they were getting up to the minute news and more news.

But over the years the true worldview of the network (that some deridingly call the “Communist News Network” or the “Clinton News Network”) has become all too apparent.

While The Gray Lady motto may be “All the News That’s Fit to Print,” kissin’ cousin CNN boasted its motto as “The Most Trusted Name in News.” Deplorables have unofficially changed the network slogan to “Holy Crap, We’re All Gonna Die.”

Indeed, is there an American with a brain and cognitive ability who really trusts CNN?

Oh sure, we trust them to blame flyover patriots for everything, including climate change. We trust CNN to report any innuendo and negative gossip possible about the President. We trusted CNN to predict Hill the Pill would win the election, and to weep inconsolably when Ms Clinton went down in wine-laden flames.

And king of the CNN inner sanctum, Wolf Blitzer, has led his own blitzkrieg on all things Trump.

The Angry Anchor, apparently infected with an early strain of Trump Derangement Syndrome, determined quickly that he would expose the Trump-Russia Collusion, despite lack of ANY evidence of said collusion, if it’s the last thing he does.

Comically Incorrect Owner/Editor-in-Chief (Cartoonist-in-Chief), A.F. “Tony” Branco, created a ‘toon to memorialize CNN’s Blitzer in all his collusion-hunting glory, and even President Trump enjoyed it enough to tweet it out to his 47.9 MILLION followers.

Trump has about 46.78 MILLION more followers on Twitter than CNN has viewers.

AND Trump has 47.57 MILLION more followers than YOU, Blitzer Blitzkrieg, have viewers. *sniff*

Thus, Donald Trump was right on the money when he tweeted this:

Bravo Tony! You captured the spirit of The Gray Gentleman, aka, CNN Anchor Wolf Blitzer, and better still, 47.9 million deplorables are smiling now that no less than Donald Trump has shared your epic cartoon!