Donald Trump Must Being Doing Something Right! 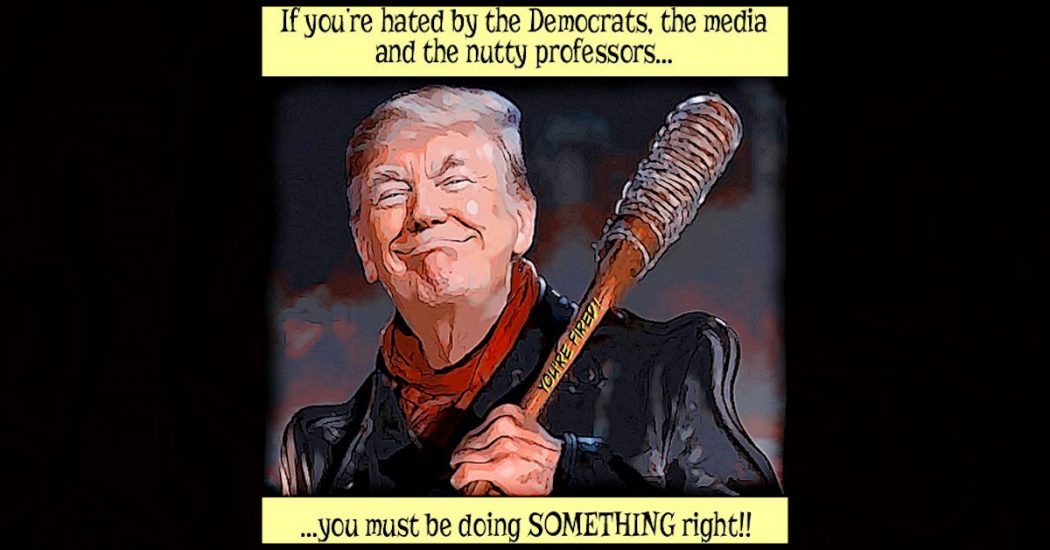 The adage, “A picture is worth a thousand words,” has never been more true. Add some punchy verbiage to a good image and you have a million dollar message.

Vietnam veteran, patriot extraordinaire, and talented cartoonist, Bob Mack, created this spot on meme that just begs to be shared!

As written at his site, Crockett Lives:

Law professor Glenn Reynolds of Instapundit often refers to the American press as Democrat operatives with bylines. (If Trump Cures Cancer, The Media Will Complain About Overpopulation):

Looking back on President Donald Trump’s first year in office, he has compiled a shockingly strong record and long list of accomplishments. As was also the case with his rise to the presidency, President Trump has broken several records for a first-year commander-in-chief and fulfilled many of his key campaign promises.

President Trump has faced an unprecedented level of never-ending obstruction throughout the year. He was the first president in memory to be deprived of the “honeymoon” period after Inauguration Day and, frankly, opposition at times has risen to levels that could arguably constitute downright treason

Donald Trump has finished his first year as the self-proclaimed people’s champ leaving a majority of his opponents floundering on the ring apron wondering just what the hell hit them. Heck, Hillary Clinton, the Sonny Liston of presidential politics, is still in a daze, last seen stumbling around India wondering what round she’s in.

I love it! A former columnist for a major SoCal paper, Mark Landsbaum (also a former journalism prof at BIOLA), who was previously a #NeverTrumper writes:

For all his faults, Donald Trump has done more good for this country in one year than Barack Obama did in 8.

He has massively reduced taxes, stimulated a booming economy and soaring stock market, restored optimism in businesses to record heights, tightened immigration, dumped the global warming trillion dollar fraud, appointed conservative judges and a pro-life Supreme Court justice, ended Obamacare’s mandatory insurance tax and, as the Wall Street Journal points out in a column naming Trump “Rookie of the Year,” he is directly responsible for a record reduction in costly, intrusive, freedom-limiting government regulations. Not bad for one year.

I grudgingly voted for Trump, hopeful that at least he would reverse some of Obama’s unconstitutional, illegal diktats and prevent Hillary’s evil agenda. He’s done all that in spades, and MUCH more. Next time I’ll enthusiastically endorse and work to see him elected. And I’ll be joined by millions who will have benefited from reduced taxes, relaxed regulations and the love of life for the unborn, to say nothing of religious liberty. Should be a big win.

But “almost no one” was wrong. Really wrong.

Trump ran, he won, he kept promises. Should be a new Latin motto.

And along the way, President Donald Trump has accrued some enemies: The Left, Mainstream Media, (most of) Hollywood, and elitist academia, all of whom are blathering on and foaming at the mouth to impeach POTUS.

The Left hate Trump, and The Left despise all of us normals who voted for him.

But what has Trump done?

Trump has respected and listened to the NRA, conservatives, and evangelicals.

You make the list of pros and cons, allies (including Israel) and enemies.

Donald Trump, in the words of Bob Mack, must be doing something right! 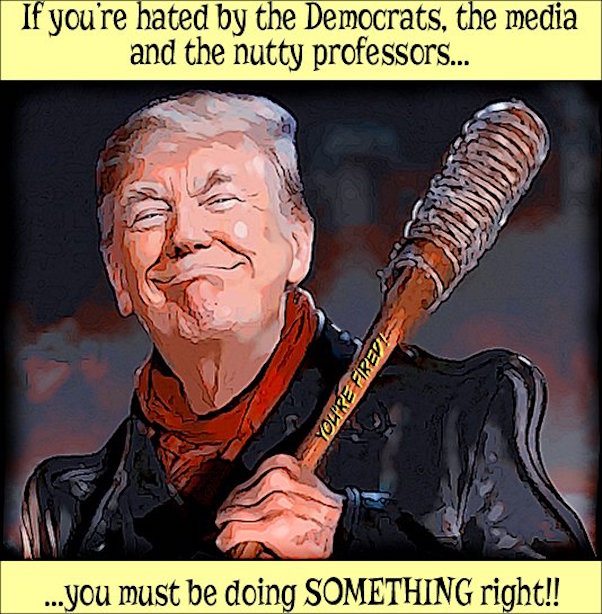