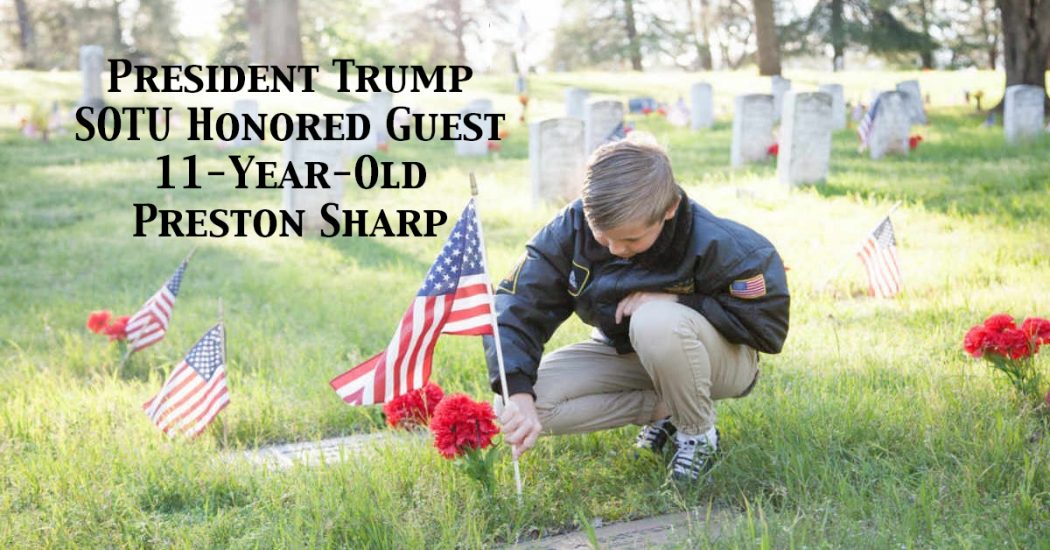 Anyone who watched the State of the Union couldn’t help but be touched by President Trump’s highlighted guests. And one particular heartwarming visitor to the Chambers was 11 year old Preston Sharp.

Oh my goodness! The All-American grinning kid grabbed everyone’s heart once we heard his story.

Preston is doing something that I learned to do from my Grandma and Grandpa — decorate graves of veterans.

But not only does he place flags and flowers on his grandpa’s grave — his grandfather was a U.S. Navy vet — he decorates thousands of other graves and now has a campaign to help fund the effort.

A little of his story:

The story of Preston honoring veterans began more than two years ago, Veteran’s Day 2015. On that day Preston visited his grandfather’s grave at a Redding, California, cemetery to place a flag and flowers in memorial to his grandfather’s service in the US Navy. It was during this visit that Preston, then just 10 years old, became upset when he noticed that other local veterans were not being honored on this special day with a flag or a flower.

Being a normal ten-year-old he continued to verbalize his irritation throughout the day, so I eventually advised him that “You can’t complain about something unless you try to do something about it.”

Preston’s response was a look of conviction and the words “I’m going to do something about it Mom!”

His attempts to raise funds began immediately when he asked how much money he could get if he vacuumed the floors. That night Preston set a goal to honor every veteran at the McDonald cemetery in Redding with the placement of a flag and a flower. Using social media, word of Preston’s effort and goal spread and the Sunday visits to McDonalds cemetery began to draw other community members, some from more than 60 miles away.

…Preston has set a new goal to honor veterans in all 50 states and to challenge others to get involved wherever they are through the Flag and Flower Challenge (#FandFChallenge).  A challenge for those across the United States, and other countries where US Service men and women are buried, to go out with a US Flag and a flower and THANK a veteran for their service.

As of January 2018, Preston has organized the placement of over 40,000 US flags and artificial red carnations at veteran’s gravesites.

Amazing. In this day and age of snowflake me-me-me Millennials desperately in need of coloring book therapy and safe spaces, an eleven year old boy is not just thinking of others, he is actively honoring those veterans who have served our nation.

Sixty years ago this might not have been quite so notable; today it’s downright heroic.

This is a kid with character, and Trump chose to honor Preston for his selfless character.

Now the other side of the coin, though he most likely is not a bad kid, but yet Obama chose to invite Ahmed Mohamed to the White House.

Remember Ahmed? He’s the Irving, Texas, ninth grade boy of Sudanese extraction who thought it would be a good idea to bring his homemade clock — which resembled a homemade bomb — to school. Most of the teachers told him it looked like a bomb.

Ahmed’s father, Mohamed Al Hassan, was the director of the Islamic Sufi Center in Texas.

A review of what took place:

The Ahmed Mohamed clock incident occurred when a 14-year-old student, Ahmed Mohamed, was arrested on September 14, 2015, at MacArthur High School in Irving, Texas, for bringing an alleged hoax bomb to school. The incident ignited allegations of racial profiling and Islamophobia from some media and commentators.

The episode arose when Mohamed reassembled the parts of a digital clock in an 8-inch (20 cm) pencil container, and brought it to school to show his teachers. His English teacher thought the clock resembled a bomb, confiscated it, and reported Mohamed to the school’s principal.

Local law enforcement was called and Mohamed was questioned by police for an hour and a half. After being handcuffed and taken into custody without being permitted to see his parents, he was transported to a juvenile detention facility where he was fingerprinted and his mug shot photograph was taken. He was then released to his parents.

Following the incident, police determined Mohamed had no malicious intent, and he was not charged with any crime.

What’s the latest with clockmaker Ahmed:

In October 2015, the family decided to move to Qatar, where Mohamed plans to continue his education in the capital city Doha with a scholarship from the Qatar Foundation for Education and will attend Qatar Academy.

The family returned to the Dallas area in June 2016, saying they missed the relatives who had stayed in the U.S., and they would return to Qatar in the fall. In August 2016, it was reported that Ahmed Mohamed will start 10th grade at Qatar Academy in Doha in September 2016.

Obama invited Ahmed Mohamed to the White House, hoping to make amends for accusations (never proven nor disproven) that the clock incident was a deliberate hoax. The Mohamed family made claims of Islamophobia.

Thus, Barack “If I Had a Son He Would Look Like Trayvon Martin” Obama inserted himself in the situation immediately, taking the boy’s side.

That’s a grand gesture if Ahmed is absolutely innocent of any pre-planned hoax. The problem being, Obama always advocated for groups like ISNA (Islamic Society of North America — big supporter of the Muslim Brotherhood), for the “prophet” Mohammed, and for pretty much any Muslim cause.

Here’s the bottom line: Americans believe in freedom of religion, but it’s a hard cold fact that the perpetrators of 9/11 were ALL Muslims. Additionally, Islam in its purest form, when lived out to the letter of the Koran, is not at all compatible with our Constitution, Declaration of Independence, and Judeo-Christian worldview.

Let’s hope Ahmed was innocent of any wrongdoing. But as late as 2017 he was tweeting anti-American, anti-police tweets, and praising Qatar:

Qatar is the safest place I've ever known. #قطع_العلاقات_مع_قطرُ

I’m sorry. As the granddaughter of legal Norwegian immigrants, I am a proponent of legal immigration.

But anyone coming to America should love our country, should want to become a naturalized and productive citizen, and should learn English. Period.

So when I learn of someone like Preston Sharp who loves America and her military veterans, it’s like a breath of fresh air.

Enough with the victim mentality!

America is the greatest force for freedom the world has ever seen. She’s not perfect — every nation is populated by fallen sinners, thus, this side of glory, there is no perfect country or government.

But by golly, she’s a beautiful nation.

Anyone that chronically complains about the U.S. of A. should lawfully work to change things or get out. Go live in whatever pathetic, socialist country you prefer. We’ll all be better off without you.