Todd Branco – Thoughts From The Grave 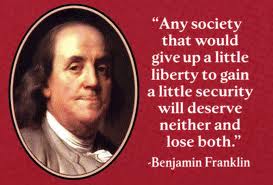 As scandal after scandal seems to be uncovered, people are still clinging to their liberal leadership regardless of the magnitude.   As some used to say “Nixon was the only person who could go to China” my father, and political cartoonist A.F. Branco, coined the phrase “ Only Obama can get away with a scandal.”

The NSA has decided that privacy is not important.   So what?

Benjamin Franklin once said, “They who can give up essential liberty to obtain a little temporary safety, deserve neither liberty nor safety.” So why should Franklin , the man Walter Isaacson stated was “the most accomplished American of his age and the most influential in inventing the type of society America would become”, be an expert on things of this nature?

Ben Franklin wasn’t just a major figure in the American Enlightenment. He was an author, printer, political theorist, politician, postmaster, scientist, musician, inventor, satirist, civic activist, statesman, and diplomat.  Benjamin had a resume that arguably gave him a platform to suggest relevancy in our era, at least enough relevancy for some to lend an ear to his advice from the grave.  But if that’s not enough, it’s important to remember the setting in which Franklin lived.

For most of us, regardless of social status, we live in a time and place where we aren’t in the immediate midst of war or invasion.  We all have struggles, trials and tribulations, but many of us are also comfortable sitting behind our computers attempting to put into perspective the violence and insanity that we hear about in the middle east, and other parts of the world.   During Franklin’s era however, he was all too familiar with war.  He also knew the negative effects of a government who did not see “faces” but instead, faceless “numbers.”  Franklin was against authoritarianism in the government and in religion.  He had a profound ……… Read more

Todd is the son of Cartoonist A.F.Branco.