Teachers and Staff Should Be Packing Heat at Schools, Churches, Etc. 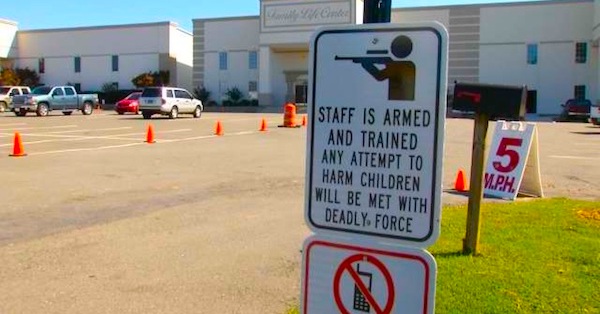 The Left has never met a gun control law they didn’t love, which only proves their abysmal ignorance of America’s history and the U.S. Constitution.

Granted, the Constitution is not the Bible, but you better believe it was written by men who deeply respected and lived by the principles of that inspired book.

Progressives — aka Socialists (aka Communist apprentices) — enact public policy with rampant disregard for our Constitution and founding documents.

You can bet Lefties are salivating over the opportunity to not only ban AR-15s, but to repeal the Second Amendment altogether. Wouldn’t you just love to survey a gaggle of millennials, Gen-Xers and Gen-Zers on the street concerning the reasoning behind the Second Amendment? How many do you suppose even know who King George, the original Beastie Boy, was? How many even know that firearms, undergirded by Providence, secured our liberty in the first place?

I am sure as can be that the average government-schooled young person could not quote the Second Amendment, which certainly protects the First.

How dumb are the gun grabbers?

They’ll tell you the Second Amendment was written about only the regularized Army. But militia members and other colonialists often had rifles, which were superior to the Army’s muscats.

You’ll hear the nonsense about gun ownership being all about hunting and home protection. Well, that’s certainly our right, to provide sustenance and protection for ourselves and our loved ones.

But the primary reason for including the Second Amendment was as a safeguard against tyranny, such as the colonials fought off in King George.

Well, what do you expect of the numbskulls like Dianne Feinstein who believed mags are disposable. Uh hum. Okay Dianne.

And never mind that most of these Leftist politicians have security detail which is armed to the teeth.

So yea. It is foolish to advocate for gun-free zones, aka Killing Zones.

Who is it that obeys such laws?

Law-abiding citizens. Ne’er-do-wells could care less about the law.

And signs just like this would be a mighty powerful deterrent for the sniveling cowards who would do evil acts of violence!