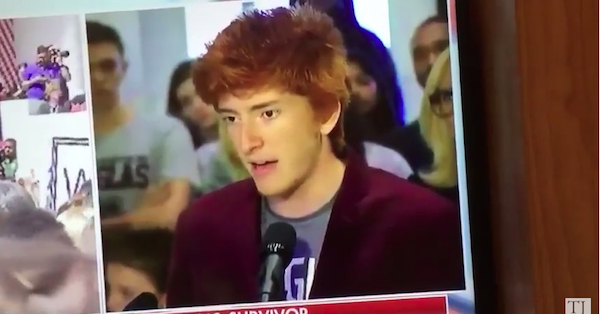 All of America is mourning the loss of seventeen lives at Marjory Stoneman Douglas High School in Parkland, Florida. Another fourteen were wounded.

The perp, “Nikolas Jacob Cruz, was arrested shortly afterward and confessed, according to the Broward County Sheriff’s Office. He was charged with 17 counts of premeditated murder.”

Murder is an evil act. And on Wednesday, February 14, 2018 — which was both Valentine’s Day and Ash Wednesday — a young man committed evil acts by slaughtering seventeen innocent teens.

Now the backlash begins. Rather than condemn the evil act, The Left, the Progressives, aggressively seek to infringe our Second Amendment rights. Rather than get to the root of the problem — the heart of an individual, hardened to the precept of sanctity of human life — Lefties choose to go after the inanimate weapon used to take those lives.

We mourn and we pray for the fallen, for their families, for the community. We pray for God’s comfort and protection.

In America, our flags are at half-staff, as a reminder of the great loss, of the senseless act that cut down young, promising lives.

Today the students, most likely fed anti-gun propaganda in the government schools for years, are protesting at their state capital, asking legislators to do something.

I won’t condemn those students, all of whom are grieving the loss of their friends.

The schools have been so busy protecting students from “horrible” influences like prayer *GASP* and the Ten Commandments. Yea, those Commandments of which number six reads:

You shall not murder. (NIV)

Yea that pesky commandment prohibiting the murder of innocents.

Once upon a time school students all knew the Ten Commandments and the Golden Rule. Not anymore; thanks very much Progressive educators.

So this morning, as the students gave impassioned pleas for something to be done to stop the slaughter, I caught this one student, Ryan Deitsch, adding his comments. Listen to what he says very carefully. Pay particular attention to his words at 1:01 ( grabbed my iPad quickly, so excuse the quality of the video itself):

I completely agree with Ryan.

Seventeen innocents were murdered last Wednesday. It was an evil act by a troubled young man who happened to use a firearm as his weapon.

Three thousand innocents are murdered daily in America via abortion.

Young Ryan spoke the truth and unwittingly highlighted a shameful problem in America.

So we continue to pray for those students, for the families who have lost a son or daughter, and for the entire Parkland community.