Run to Sanctuary California All You Illegals: Free Stuff Awaits! 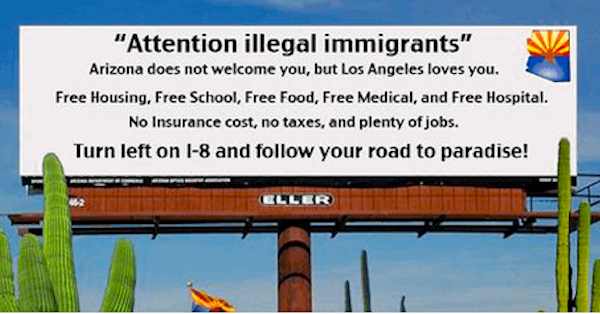 While POTUS Trump tries to make America a country of laws again, one state in particular is doing its level best to stop the “obey the law” trend.

Yessiree…the Golden State has decided NOT to follow federal law, but rather, declare themselves a “Sanctuary State.”

That would be sanctuary for illegal aliens. Emphasis on illegal. Perhaps next they will add other classes to the sanctuary umbrella? Polygamists? Money launderers? Swindlers? Counterfeiters?

All you downtrodden who just want to live life doing your own thing, California is the place you want to be.

How, you might ask, are these “policies” affecting the Left Coast’s largest state?

Well, most assuredly illegals are getting the message. The state motto, “Eureka!” has become the shout of any and all aliens; what else would they say about a place that protects law-breakers from federal agents, and taxes legal residents to the point of insolvency to provide for the trespassers?

And all the bluster about California seceding?

We constantly hear now about California’s threat to secede from the US. In certain ways, it already has, such as declaring itself a “Sanctuary State” in explicit defiance of the Federal Government.

What is needed is to ask, why shouldn’t it be the other way around? Why shouldn’t the rest of America kick California out of the United States?

What was the Golden State has become a Third World Poverty Pit sprinkled with gated and walled enclaves of the fantastically wealthy 1% — just like every corrupt kleptocracy in Africa. California has become the poster child for the catastrophic destructiveness of Politically Correct Progressivism.

Yesterday on March 1st, the headline on Fox News was: California Has Worst Quality of Life in US, Study Shows. That same day, the Los Angeles Times headline was: How Can a Place [Downtown Los Angeles] with 58,000 Homeless Continue to Function?

This state of disastrous affairs, the ruination of what was an American Paradise, is the complete and total creation of California Democrats, wielding monopoly power in the state government at Sacramento and the largest municipalities of LA and San Francisco.

Thanks to them, California has become an AINO State – American in Name Only – run by Hate America Marxists and flooded by them with illegal aliens illegally voting to keep them in perpetual power guaranteed with perpetual welfare paid for by exploited taxpayers.

There is a solution to all this: the rest of America stops putting up with it. We tell California to get the hell out of our country.

Amen Dr. Wheeler! Most of my good friends in California are already making plans to move to Texas or Arizona. Many have already liquidated and moved.

The Golden State has lost its sheen. Maybe it should lose it’s statehood as well?