No Wonder Bibi Netanyahu Was Overjoyed to See Obama Exit the WH! 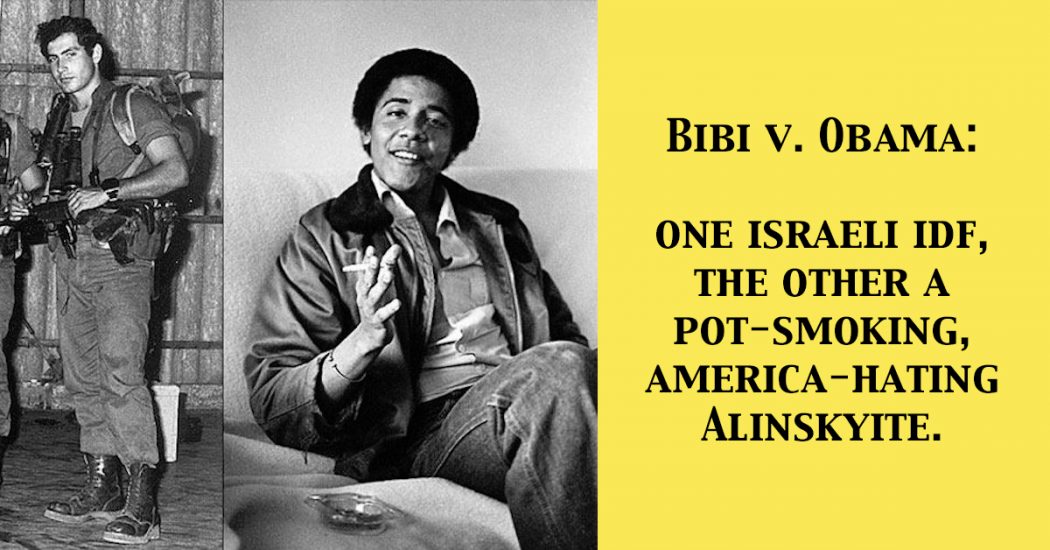 It was clear from the beginning that there was absolutely no love lost between Benjamin Netanyahu and Barack Obama. Obama treated the Israeli Prime Minister like a scorned mother-in-law, making him cool his heels at the White House, instructing him to enter by a side door.

Obama, in his 1st term found the opportunity to visit some 32 different countries on 47 trips. However, the one very important country and long-time ally not visited? Israel. We should remember that Obama purposely bowed to Saudi King Abdullah, told outgoing Russian president Dmitry Medvedev that Vladimir Putin should give him more space until after the election, and foolishly proclaimed that Venezuelan President Hugo Chávez was no special security threat!

America knew next to nothing about the 44th president and what we did know was not good. He and Michelle attended Rev. Jeremiah “God-da*n America” Wright’s church in Chicago, rubbing elbows with the “Pastor” for over 20 years. That much we knew.

Frank Marshall Davis (1905-87) was a hardcore communist, an actual card-carrying member of Communist Party USA (CPUSA), who spent time with a young Barack Obama throughout the 1970s, right up until the moment Obama left Hawaii for Occidental College in 1979.

Davis joined the Communist Party in Chicago in the early 1940s. CPUSA members swore an oath to “ensure the triumph of Soviet power in the United States.” They were dedicated to what CPUSA leader William Z. Foster had openly called “Soviet America.” Notably, Davis joined CPUSA after the Hitler-Stalin Pact, a time when many American communists (especially Jewish communists) had bolted the Party in disgust that their Soviet Union had allied with Hitler.

As we know from Davis’s declassified 600-page FBI file (and other sources), his Party card number was 47544. He was very active. In 1946, he became the founding editor-in-chief of the Chicago Star, the Party-line newspaper for Chicago. There, Davis shared the op-ed page with the likes of Howard Fast, a “Stalin Prize” winner, and Senator Claude “Red” Pepper, who, at the time, sponsored the bill to nationalize healthcare in the United States.

Frank Marshall Davis would eventually meet a young Barack Obama in 1970, introduced by Obama’s grandfather, Stanley Dunham, for the purpose of mentoring. The boy’s grandfather felt that the fatherless boy was in need of a black-male role model. For that, Dunham chose one of the most politically radical figures in all of Hawaii.

And of course there was Obama’s admitted marijuana use — he was a member of what they jokingly named the “Choom Gang.”

So what we knew about Obama was bad. What we learned about Obama, champion of “the Prophet” and all things Muslim, was worse.

Contrast that with Benjamin Netanyahu. As written at wikipedia (that bastion of conservative thought, NOT):

Netanyahu was born in 1949 in Tel Aviv, Israel, to an Israeli-born mother, Tzila Segal (28 August 1912 – 31 January 2000) and a Warsaw-born father, Prof. Benzion Netanyahu (1910–2012), the middle of three children. He discovered via a DNA test that he is of part Sephardi Jewish ancestry. He was initially raised and educated in Jerusalem, where he attended Henrietta Szold Elementary School. A copy of his evaluation from his 6th grade teacher Ruth Rubenstein indicated that Netanyahu was courteous, polite, and helpful; that his work was “responsible and punctual”; and that Netanyahu was friendly, disciplined, cheerful, brave, active and obedient.

After graduating from high school in 1967, Netanyahu returned to Israel to enlist in the Israel Defense Forces. He trained as a combat soldier and served for five years in an elite special forces unit of the IDF, Sayeret Matkal. He took part in numerous cross-border assault raids during the 1967–70 War of Attrition, rising to become a team-leader in the unit. He was wounded in combat on multiple occasions.

After completing his army service in 1972, Netanyahu returned to the United States in late 1972 to study architecture at the Massachusetts Institute of Technology (MIT). He returned to Israel in October 1973 to serve in the Yom Kippur War in the Sayeret Matkal commando unit. While there, he fought in special forces raids along the Suez Canal against the Egyptian forces, before leading a commando attack deep inside Syrian territory, whose mission remains classified today.

You get the point. One guy was a tough as nails hero. The other was a effete, pot-smoking, Communist-nurtured community organizer.

Hence the chilly relationship between Bibi and O-Bozo.

Thank God Almighty those days are over.

And thank God we now have a President who loves America and Israel — Bibi and that little Jewish state understand and love us back.