Mueller’s Never-Ending Search for Anything to Bring Down Trump 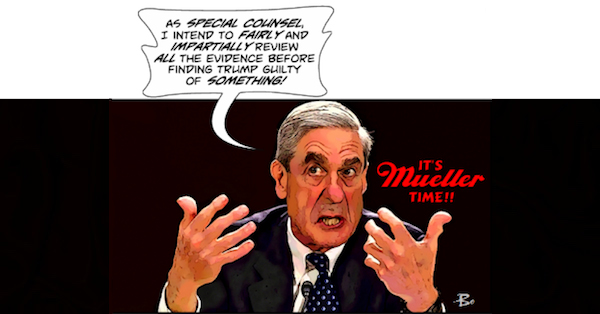 Time flies when you’re having fun. Everyone knows and learns that at an early age.

Conversely, if you’re not having fun, let’s say you’re stuck in a remote outpost with ungodly hot and humid weather making every day pure hell…well then, time creeps along at the proverbial tortoise pace.

Or, for example, a certain former FBI Director Robert Swan Mueller III was appointed as Special Counsel to investigate alleged foreign government collusion with Team Trump to interfere in United States’ elections, with no credible evidence to substantiate said investigation. Well then, time would slow almost to the point of reversal.

Every day the American people wake up to hear new supposed allegations.

That whole “Trump colluded with Russia” thingy didn’t pan out. Even worse, turns out Hill the Pill Clinton foot the bill for the dossier used to prompt the investigation.

How does that work exactly?

HRC, of the …er…the Clinton Foundation, paid for a dossier compiled by a foreign operative to find dirt on candidate Trump. But that same “lady” sold 20% of our U.S. strategic uranium to her pals the Russkies.

In spite of all the nefarious activities and ties of Bubba and Hill, Bobby Mueller was appointed as Special Counsel for, as Andrew McCarthy points out, two reasons:

(1) ostensibly to take over a counterintelligence probe; (2) in reality, as a cave-in to (mostly) Democratic caviling over Trump’s firing of FBI director James Comey — which was lawful but incompetently executed.

But in this Groundhog Day-like  investigation, we wake up every morning and the never-ending probe continues with yet different goal posts.

And time drags on.

The “collusion” accusation was a bust. So the second verse, same as the first, a little bit louder and a little bit worse, is an ever-changing raison d-être for the Mueller probe.

The Democrats did not want a special counsel in order to investigate a crime; they wanted a special counsel (a) to promote a political narrative that Hillary Clinton lost because of something other than her lack of appeal and (b) to frustrate Trump’s ability to govern — to mollify their “Resist!” base, to stop Trump from implementing policies they oppose, and to enhance their electoral hopes in the 2018 and 2020 cycles.

The latest refrain in the “Mueller’s Gonna Get Trump” ballad is obstruction. But here the investigation grows even swampier.

Read what McCarthy (and other knowledgeable Con Law attorneys) has to say:

A president should not be subjected to prosecutorial scrutiny over poor judgment, venality, bad taste, or policy disputes. Absent concrete evidence that the president has committed a serious crime, the checks on the president should be Congress and the ballot box…Otherwise, a special-counsel investigation — especially one staffed by the president’s political opponents — is apt to become a thinly veiled political scheme, enabling the losers to relitigate the election and obstruct the president from pursuing the agenda on which he ran.

A president, of course, may not subvert an investigation by unlawful actions — e.g., by conspiring to suborn perjury or bribe witnesses (cf. Clinton, Nixon). Illegal acts could amount to actionable obstruction. But the president’s dismissal of subordinate executive officials (such as the FBI director), and his exercise of prosecutorial discretion (by merely weighing in on whether a person — here, Flynn — deserves to be investigated), are constitutional acts that are not judicially reviewable. Executive prerogatives that are not subject to judicial review may not be subjected to judicial review by indirection, under the guise of a prosecution.

You see, the highest executive officer in the most powerful nation in the world was never meant to be tied up in political investigations barring REAL crimes committed.

Thus my pal Bob Mack nails it with this cartoon. 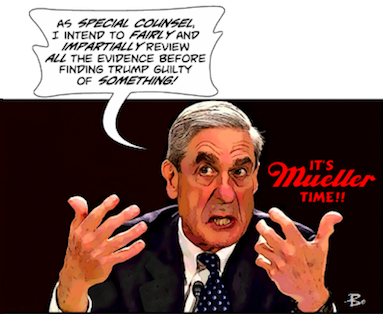 Problem is, Trump may not be a highfalutin, smooth-talking, ever-sensitive Commander in Chief, but he’s no criminal, no scoundrel. In fact, most of us voted for Trump because he espoused our values — life, national security and sovereignty, legal immigration, less government regulation on individuals and businesses — and we happen to like that he’s a rugged straight shooter.

When I vote for a man for president, I want a real man. I don’t want some touchy-feely effete male. Give me a man’s man every time.

Eventually, maybe, this Mueller investigation will grind to a halt and time will pick up the pace and allow Trump to actually govern.

Until that time, you can bet your bottom dollar that Mainstream Media (I won’t even pretend to call them journalists) and the rest of the #Resist nincompoops will maintain the pouting and heckling, like a pack of rabid, ankle-biting little dogs.

And time drags on.