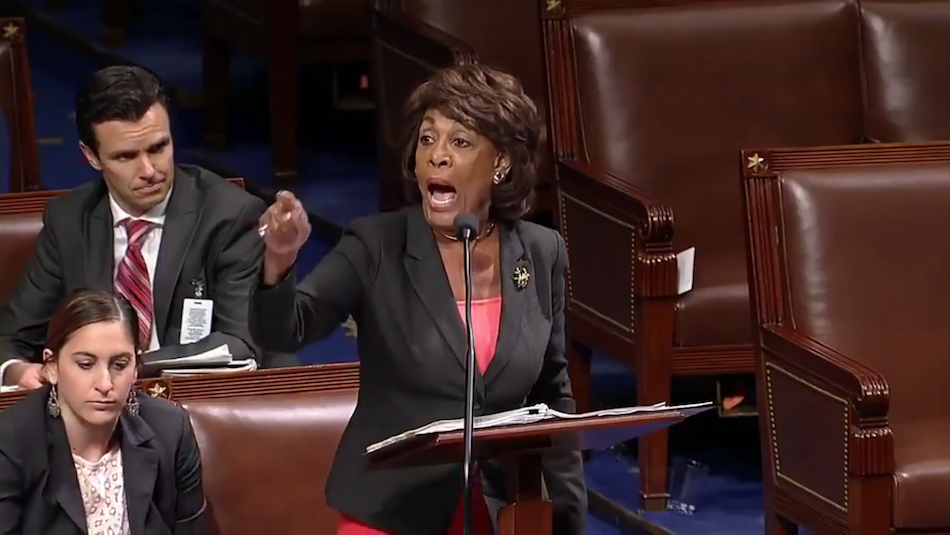 Americans imagine that the U.S. House — both the House of Representatives and the Senate — conduct the people’s business daily in a grownup, dignified manner.

Of course our system of government is adversarial, with the checks and balances of the judicial, legislative and executive branches curtailing highhandedness and far-fetched maneuvers. Dems (aka Socialists these days) push the Republicans (Conservatives) and the GOP lately, thank goodness, pushes back.

But of late the Trump Derangement Syndrome epidemic rages on, all of The Left (Dem elected officials, education elitists, self-important Hollywood stars) fully infected to the point of mental instability.

And there is no better example of the disease in its final stages than Democrat Maxine Moore Waters. AKA Mad Maxine.

A mere two weeks after the inauguration of Donald J. Trump, Mad Maxine began using and abusing the “I” word — impeachment. On Feb 3 MM tweeted:

Today, I told @cheddar that my greatest desire was to lead @realDonaldTrump right into impeachment.

Yes. She went there.

And every time this California Left Coast Lefty (elected by, what must surely be brain-dead residents in LA County) opens her mouth on camera she launches into another “IMPEACH DONALD TRUMP!” tirade.

In fact, Madame Maxine has become the Queen of Tirades, the Indisputable High Empress of Anti-Trump Tantrums.

The diminutive but mighty Michelle Malkin wrote on Mad Maxine at National Review:

I do not have enough guffaws to give.

This new spokesmodel for civility and clean government has stoked division and exploited taxpayers for decades.

Change agent? She has served on the Democratic National Committee since 1980 — when the Atari 2600 was cutting-edge, Kim Kardashian was a newborn, and Al Franken was hamming it up on Saturday Night Live.

Waters has spent 37 years in office — many of those years as head of the Congressional Black Caucus — promising to make life better for constituents in economically ravaged South Central Los Angeles.

What do the denizens of her district have to show for it? Staggering levels of persistent unemployment, poverty, and gang violence…

The newfound Maxine Waters Fan Club might want to know that Waters’s government cronyism and self-dealing earned her a “Most Corrupt member of Congress” designation from the left-wing Citizens for Responsibility and Ethics in Washington five times — in 2005, 2006, 2009, 2011, and 2017.

But even with that backdrop, fully knowing that Representative Maxine “Metastatic TDS*” Waters has long been bubbles and bubbles off plumb, her juvenile display in the House of Representatives last week is jaw-dropping. Surreal.

MM lashed out at Representative Mike Kelly, virtually ignoring the Chair’s admonition to address “comments to the Chair.”

Kelly was a private (and successful) businessman prior to running for Congress in 2009 — he took over the reins of Kelly Chevrolet-Cadillac, Inc. (founded by his dad in 1950) in the mid-1990’s.

That said, Kelly knows what it takes to run a business and to have employees depending on him for paychecks.

And while Kelly was running the family business, Miz Waters was working deals with her connections:

According to Chuck Neubauer and Ted Rohrlich writing in the Los Angeles Times in 2004, Maxine Waters’ relatives had made more than $1 million during the preceding eight years by doing business with companies, candidates and causes that Waters had helped.

Waters came under investigation for ethics violations and was accused by a House panel of at least one ethics violation related to her efforts to help OneUnited Bank receive federal aid. Waters’ husband is a stockholder and former director of OneUnited Bank and the bank’s executives were major contributors to her campaigns.

Kelly: We are trying to make sure that we are making America great every day and every way. And the best way to do that is to stop talking about discrimination and to start talking about the nation! We’re coming together as a people in spite of what you say!

Thank-you gentlemen, I yield back.

Chair: The gentleman’s time is expired. The members are reminded to address their comments to the Chair. The gentleman from Texas reserves. The “gentle lady [loosely used term] from California.”

Waters: Thank-you very much. The gentleman…Mr. Kelly…please do not leave. Because I want you to know that I am more offended as an African-American woman than you will ever be! And this business about making America great again? It is YOUR president that is dividing this country! And don’t talk to me about the fact that we don’t understand what happens…no I will not yield! No I will not yield! Don’t tell me that we don’t understand! That’s the attitude that’s been given to women time and time again…

Chair: The gentle lady will suspend. The Chair wishes to remind all members that they are to address their remarks to the Chair.

Waters: I respect the Chair. But don’t stop me in the middle when you didn’t stop him in the middle! And so I shall continue. Don’t you dare talk to me like that and think that somehow women don’t understand what goes on on the floor of automobile dealers!

Chair: …reminded to direct her remarks to the Chair.

Well, just watch the whole video and you’ll get the idea. Needless to say Maxine won’t being winning any Miss Congeniality contests any time soon, if ever.

Another day, another episode of As The House Churns with Mad Maxine playing the lead role of the unhinged, corrupt antagonist.

Americans deserve so much better.

However, those Californians who were nuts enough to elect this paragon of vice? Well, perhaps they should volunteer to join Rep. Waters on the next three hour Hank Johnson cruise to Guam.