The Left Wants to Ban Guns Rather Than Deport Illegals! 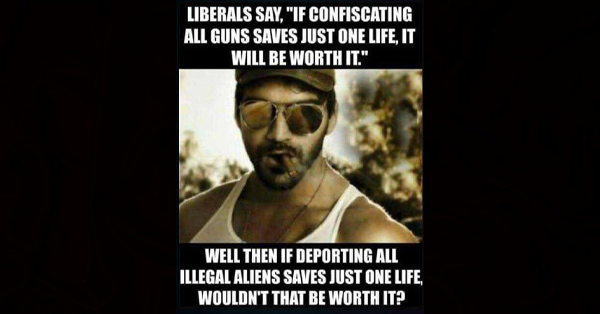 Any American patriot who has a modicum of knowledge of United States history, of our founding documents — the Declaration of Independence and the U.S. Constitution — understands that firearms played a big part in our independence.

The British — King George III and his agents in America — sought to seize the Colonials’ rifles, muskets, ball, and powder, and thereby control the settlers and further cripple them with taxes.

The Second Amendment was added in spite of some who protested: many in the New World thought it nonsensical to add a right to keep and bear arms. After all, they had recently secured their independence from the tyranny of King George due in large part to the colonials being armed. Surely no one would ever seek to disarm Americans?

The proponents of the Second won the day, thank goodness, because now the Progressives (aka Socialists) would love nothing more than to disarm the “lowly, unenlightened masses.”

The Left — Feinstein and Bloomberg and Pelosi et al — don’t care about the citizens’ health and well-being — they care about CONTROL! Period.

Think of gun-free Chicago with its astronomical murder rate. Gun-grabbers hate that topic. Bring up The Windy City and you get a chorus of Lefties, fingers in ears, shouting, “LA LA LA I can’t HEAR you!!!”

The radical left call them undocumented and paint a picture of peaceful, law-abiding (uh…didn’t the break the law to get here?) people who just want to be Americans.

These illegals don’t want to become Americans. They do NOT want to assimilate and learn English and be good citizens.

Hint: good citizens do not break the law.

What these illegals do want to do is become recipients of American healthcare, food, housing, schools, etc., all on the taxpayer dime. Oh you can be sure the Socialists call it free. But it is not. Might be free to those who sneak across our border then scurry quick-like to the nearest bleeding heart Democrat to sign up for free stuff.

But the so-called “free stuff” is expensive to Americans.

Kate was the daughter of Jim and Liz. Danny had a wife and two daughters. Michael Davis left behind a wife and four children.

Oliver and Davis’ killer, Luis Bracamontes, was “a Mexican citizen who had been deported repeatedly and had a felony drug and weapons history.”

Those are but three examples out of hundreds across this land.

Let’s get something straight: anyone who sneaks into the United States of America unlawfully is already a lawbreaker.

If someone is in this country illegally, they should leave. Period.

So if the Lefties really want to protect Americans, they will get on board with building the wall and securing our border AND deporting illegal aliens.