Hillary Should Be Wearing an Orange Jumpsuit or White Straightjacket! 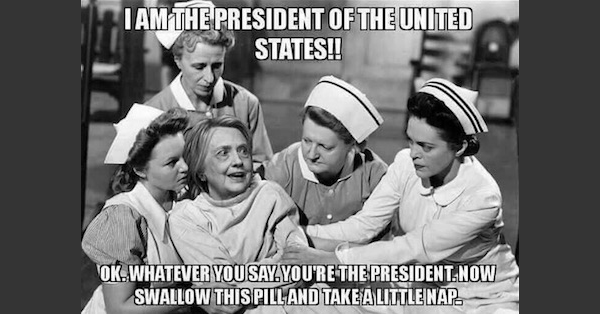 Any who have followed Hill and Bubba’s trajectory understand the couple are all about power. To that end, Bill is the charm offensive — some might say just plain offensive — schmoozing and flirting his way past any impediments and into the oft-times unwilling arms of any nearby non-Hillary female.

HRC is the schemer of the duo, navigating the rough waters left in the wake of Bill’s dalliances, acting as chief prosecutor and accuser of any Bill-Clinton-wronged-woman.

Side by side Bill and Hill have trounced through life, disposing of enemies, slipping out of any and all repercussions and consequences, accumulating vast amounts of wealth and power.

Suffering a near psychotic break, Hillary would not even deign to speak to her hordes of followers at the Jacob K. Javits Center in Midtown Manhattan. Instead she sent out lap-dog campaign chairman John Podesta to tell her weeping supporters to go home.

Hill, it was rumored, was cussing up a white wine-infused blue streak in her hotel room. As if to emphasize the depths of the Clinton campaign despair, one staffer yelled into her phone, “Its a f***ing funeral!”

Since November 8, 2016, and Hillary’s crushing defeat by her nemesis, Donald Trump, Madam Pantsuits has been offering up one excuse after another, including her infamous book, What Happened. It seems Ms. C. cannot help herself — she has some twisted variety of Tourette syndrome whereby she can’t stop shouting excuses for why she lost.

According to Bill’s better (but in no way good) half, everyone is to blame for her electoral loss. Everyone but her.

Her latest gambit as described by Paula Priesse:

Hillary Clinton was in India today showing once again her pure hatred of flyover Americans.

Clinton: “There’s all that red in the middle, where Trump won. Now, I win the coasts, I win Illinois, Minnesota, places like that. But what the map doesn’t show you is that I won the places that represent two-thirds of America’s gross domestic product. So I won the places that are optimistic, diverse, dynamic, moving forward, and his whole campaign, Make America Great Again, was looking backwards.”

The delusional Hildabeast then added this BS about Trump’s pitch to voters:

“You don’t like black people getting rights, you don’t like women getting jobs, you don’t want to see that Indian-American succeeding more than you are, whatever your problem is, I’m going to solve it.”

So granny, you lost not because you were a lazy, corrupt and thoroughly uninspiring candidate, but because you believe half of America is poor, racist and sexist. If justice is ever served, this VILE AND EMBITTERED SHREW will spend her remaining years behind bars!

Amen Paula! You’re a woman after my own heart and said it well! 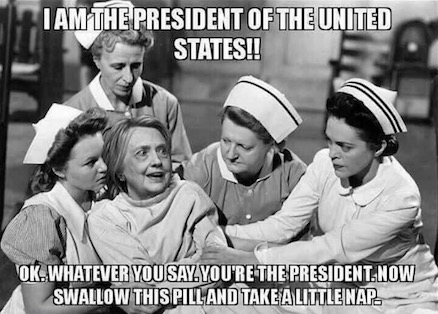