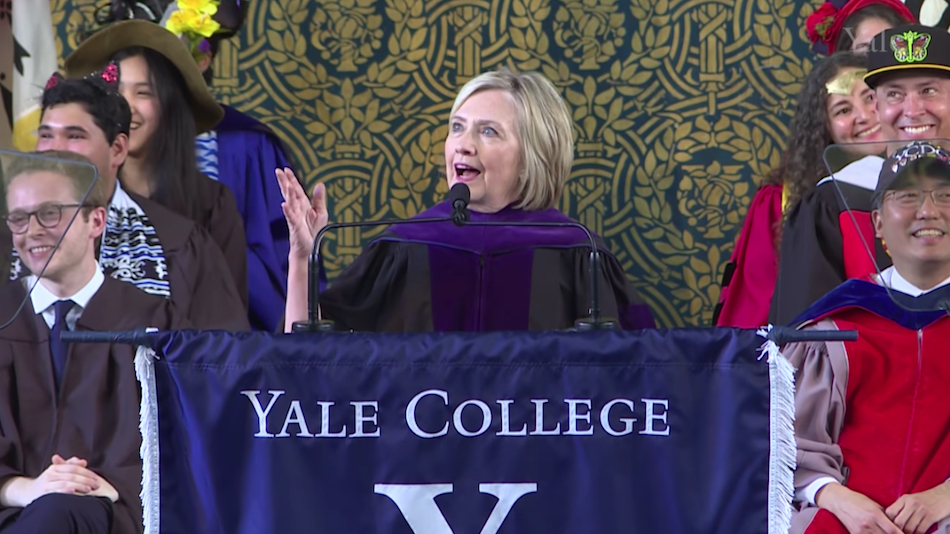 As an esteemed and über expensive Ivy League school, Yale draws media attention and carries weight with all the Fortune 500 companies.

Like its seven fellow Ivies, Yale was founded as “an institution to train ministers and lay leadership.” Yep. Yale was the school expected to churn out pastors and congregants well versed in the Bible and biblical theology.

So it would be pretty true to say Yale and most of the Ivy League colleges have literally gone to hell. No kidding.

And of course if you’re Yale and you want to invite a fantastic commencement speaker who do you ask?

Ask the 2009 highly esteemed Margaret Sanger Award Recipient, the ardent champion of abortion, the woman renowned for selling 20% of our strategic uranium to Russia, the dame who eviscerated very women preyed upon by her infamous philanderer hubby, the presidential candidate who not only lost the election, but has since trotted the globe making excuses for her epic loss.

Yes. Of course. Ask Hill the Pill Clinton to speak!

All those impressionable young graduates can soak up the Rules for Radicals she learned at the feet of Commie Agitator Saul Alinsky!

Think of it: on top of shelling out almost $50K per year for tuition to have their little darlings propagandized with the most extreme leftist ideology, parents this year had the added bonus of words to live by from Madame HRC herself.

So what did these oh-so-very-lucky parents get for their cool $200K, commencement speaker-wise?

Ms. Clinton (who thankfully had a commencement gown over her traditional pantsuit) chortled through the story of why she chose Yale over Harvard:

Now to be honest [what? are you ever honest?] I had had some trouble making up my mind between Yale and Harvard law schools. Then one day, while we were still in that period of decision making, I was invited to a cocktail party at Harvard for potentially incoming [“INCOMING!” an apt term for the arrival of HRC] law students, where I met a famous law professor.

A friend of mine, a male law student, introduced me to this famous law professor. I mean truly…big three-piece suit, watch-chain.

And my friend said, “Professor, this is Hillary Rodham. She’s trying to decide whether to come here next year or sign up with our closest competitor.”

Now the great man gave me a cool dismissive look [you would know that look, Hill, you’ve perfected it] and said, “Well, first of all we don’t have any close competitors. and secondly, we don’t need any more women at Harvard.”

To which Hillary replied, “Well do you need any cackling witches? (or a word that rhymes with that)”

Actually I made that up. Just kidding. But it sure seemed true to character!

Next Hill regaled the grads with the story of meeting her future husband, William Jefferson Clinton:

I confess, of all the formative experiences that I had at Yale, perhaps none was more significant than the day during my second year when I was cutting through what was then the student lounge with some friends and I saw this tall handsome guy with a beard who looked like a Viking [NO! DON’T disparage all of us Vikings by assigning the nefarious Bubba to our Nordic bloodlines!].

And she said, “That’s Bill Clinton. He’s from Arkansas and that’s all he ever talks about!

Yadda yadda. Just what we never wanted to hear: the Hill and Bill love story, a match not made in heaven, but someplace farther south and scorching hot.

One day I saw a note about a woman named Marian Wright Edelman a Yale Law School graduate, civil rights activist, who would go on to found the Children’s Defense Fund. Marion was coming back to campus to give a lecture.

I went. I was captivated to hear her talk about using her Yale education to create a head-start program in rural Mississippi. And I wound up working for her that summer.

And the experience opened my eyes to the ways that the law can protect children.

Does that strike you as odd?

Children? As in those little humans that begin life in a supposed safe zone, i.e. the womb?

The proud recipient of the Margaret Sanger Award — Sanger being the loathsome eugenicist who founded Planned Parenthood (the organization responsible for the killing of 7.6 million babies since Roe v. Wade — that sure sounds like genocide!) — that same woman wants these grads to believe she is a compassionate grandmother who loves “all the little children of the world.”

Sorry. Can’t swallow that. Jesus loves the little children. Hillary, not so much.

Well, HRC loves the children if they grow up to vote for her. Maybe love is too strong a word, too foreign a word for HRH Misses Clinton? Tolerate might be a more apt word.

The moral of this story?

Nearly every graduate was enraptured by the Queen of Excuses, smiling and laughing at every phrase as though listening to a Mark Twain or Garrison Keillor…oops. Strike the Keillor. Too Bill-like.

You get the point.

And God have mercy on the parents who chose to throw nearly a quarter of a million dollars at a once stellar institution that would invite one-half of the Clinton Deadly Duo to speak at commencement. Thus, sending the grads on their way with her words of …perverse vanity.

Oh how the Ivies have fallen!