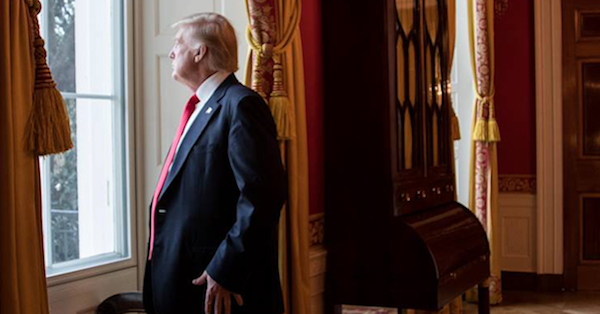 Editor’s note: Sometimes you come across a post that needs to be shared. And this small post by Karen Vaughn is one such missive. “Billy and Karen Vaughn are the parents of fallen Navy SEAL, Aaron Carson Vaughn (SEAL Team VI). On August 6, 2011 Aaron was killed in action in the Tangi River Valley of Afghanistan when a chopper (call sign Extortion 17) carrying thirty Americans was shot from the sky.” Let me tell you, when a Gold Star Mom speaks, people listen. These moms have endured unimaginable loss and have earned the right to a bully pulpit. They are not some fawned over TV show host or starlet. GSMs are the stuff that made America truly great, raising kids who understand the meaning of “the last full measure of devotion.” God bless you, Karen, and all Gold Star Moms. Tami Jackson

I believe with all my heart that God placed that salty sailor in the White House and gave this nation one more chance in November 2016. Donald Trump is what he is. He is still the man he was before the election. And without guilt, I very much admire what that salty sailor is accomplishing.

He’s not like me. That’s okay with me. I don’t want to be like him. I will never behave like him. I know we’ve NEVER had a man like him lead our nation. It’s crazy and a little mind blowing at times. But I can’t help admire the ability he has to act with his heart rather than a calculated, PC, think tank-screened, carefully edited script. I still believe that is WHY he became our President and WHY he’s been able to handle a landslide of adversity and STILL pass unprecedented amounts of good legislation for our country AND do great works for MANY other nations, including Israel.

I’m THRILLED with what he’s doing for my nation, for the cause of Christ (whether intentional or unintentional, doesn’t matter to me), and for the concept of rebuilding America and putting her FIRST. I will not be ashamed of my position because others don’t see him through the same lens.

Should it matter to me if a fireman drops an f-bomb while he’s pulling me from a burning building? Would I really care about what came out of his mouth in those moments? Heck no! I’d CARE about what he was DOING. He wasn’t sent there to save my soul and I’m not looking to him for spiritual guidance. All I’m thinking in those moments is, “Thank you, Jesus, for sending the fireman.”

This man is crass. Okay. He’s not careful with what he says. Okay. You feel offended that he’s not a typical statesman. Okay. But he is rebuilding the nation my son died for…the nation I feared was on a fast track to becoming a hopeless cause. Forgive me if I’m smiling.