Gloria Steinem and the Other Radical Feminists Have Zero Logic 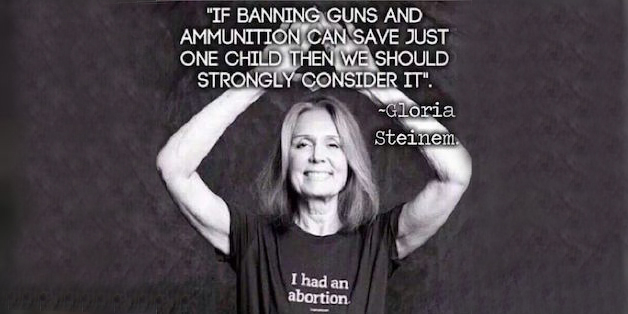 Radical feminists –some call them “feminazis” — worked hard over the last half century to do what Barry “I have a pen and phone” Obama sought to do in his two interminable terms: fundamentally transform (i.e. destroy) America.

Gloria Steinem was the godmother of radical feminism and the sexual revolution.

As I wrote last December:

If Cosmopolitan magazine was the “bible” of free love, sex and orgasm for the single girl, Gloria Steinem was the prophetess of the sexual revolution.

Steinem founded Ms. magazine in 1969, which happily harmonized with Cosmo, further disseminating the dogma of free love and sex without the tedious tether of marriage.

The devotees of [Helen Gurley] Brown and Steinem–who were once college radicals burning bras, protesting the Vietnam War, rebelling against parental authority, and belittling the institution of marriage–are now ensconced in America’s halls of academia teaching malleable young minds.

We now know what happens when you teach a nation that people have no intrinsic value, that women are mere means to pleasure, that women should want unfettered sex whenever and however, and that humans in utero are disposable.

Ms. Steinem made no secret of her abortion at age 22 and writes openly:

I didn’t begin my life as an active feminist until that day. It [abortion] is supposed to make us a bad person. But I must say, I never felt that. I used to sit and try and figure out how old the child would be, trying to make myself feel guilty. But I never could!

Nothing like killing your own child to inspire one toward a brave and brazen job move!

Sexual Revolution Kick-Starter Steinem has been opposed to pretty much any and every conservative principle and belief.

Although, she was married for a brief time from the age of 66 until her husband, David Bale (father of actor Christian Bale), died. That was one spark of normalcy in her otherwise abhorrent life.

Gloria has been pushing abortion for over 50 years. What a legacy.

And her latest hobby?

Ms. Steinem really wants to save the children of America…uh…the ones that have actually survived the abortionists’ killing zones.

Anyone else aghast at this meme and it’s import?

Let’s think about it. According to Feminist Gloria, killing a baby in the womb — or on its way out of the womb — is A-Okay.

Killing anyone with a gun? Not so much.

Yea. You radical feminists really have a heart. Babies in America take note.

And Ms. G? Hope you like really hot places because, barring a big-time come to Jesus, Paul on the road to Damascus moment, you have a one-way ticket to a very hot, very dark place.