Donald Trump Has Lunch With the Pope and MSM Reports… 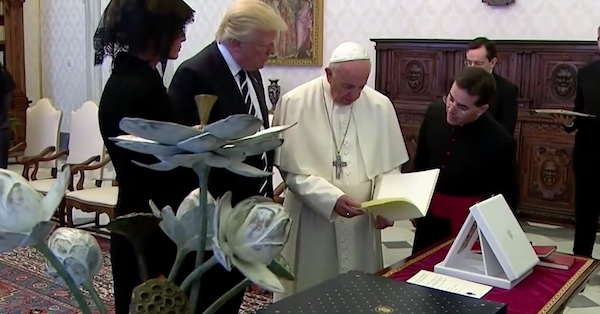 Editor’s note: The Mainstream Media full scale attack against Donald Trump began during the 2016 campaign season, picked up furor after the election and with each passing day of Trump’s first year. We’ve all known for decades that the bulwark of “news” is anything but: CNN and MSNBC are rabid arms of the Democratic Party and any and all radical fringe groups, #BlackLivesMatter, #LoveIsLove, #MeToo, #Resist, etc. In the words of Newt Gingrich, “The media awaken every day thinking ‘I know Trump did something horrible. What is it?’ ” Truer words were never spoken. Thus, we must all be suspect of every word broadcast by MSM. Tami Jackson
_____________________

President Trump invited the Pope for lunch on his mega yacht; the Pope accepted and during lunch, a puff of wind blew the Pontiff’s hat off, right into the water.

It floated off about 50 feet, then the wind died down and it just floated in place.

The crew and the secret service were scrambling to launch a boat to go get it, when Trump waved them off, saying “Never mind, boys, I’ll get it.”

The Donald climbed over the side of the yacht, walked on the water to the hat, picked it up, walked back on the water, climbed into the yacht, and handed the Pope his hat.

The crew was speechless. The security team and the Pope’s entourage were speechless.

No one knew what to say, not even the Pope.