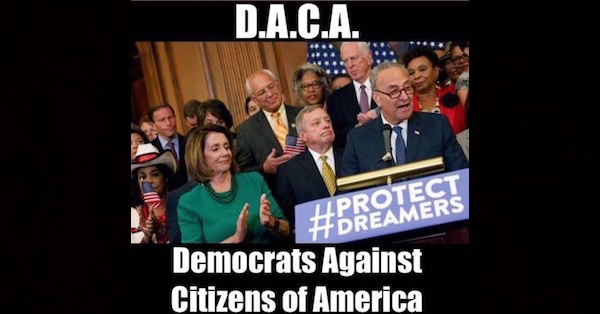 Chucky Schumer and archaic botoxed pal, San Fran Nan, huff and puff about the poor Dreamers. They demand that Trump and everyone who voted for Trump acknowledge that these poor young people, brought into our country by their LAW-BREAKING parents, be allowed to stay forever and ever.

The “Deferred Action for Childhood Arrivals”  so-called immigration policy established by Barack “I have a pen and a phone” Obama in June 2012. And as of 2017, 800K were enrolled in DACA.

The first question that comes to mind is, if there are 800,000 aliens enrolled in DACA, why is Trump willing to give almost 2 million illegals a path to citizenship? AKA AMNESTY.

But no matter. Trump made his offer and didn’t even receive a counter-offer. The dang Dems just said, “No!”

Talking Heads tell us that Trump, like the Deal Maker he is, always begins negotiations with some slightly extreme first offer, then the counter measures and back and forth ensue.

Not so the now Socialist Democrats who are frantically in need of new people in their electorate plantation. Those earth-lovin’, Al Gore-channeling, Bernie-quoting Lefties don’t breed enough to have new voters. For one thing, the Leftie Women creatures are too busy berating real men to let any of the males close enough for baby-making gymnastics.

And another point: have you noticed that, after a years of screeching and anger, radical leftist women have faces frozen in a permanent scowl? Hmm. The better to ward off the despised Toxic Masculinity!

In the face of declining voter rolls, The Left are now fully beholden to all of the radical immigration groups, which, by the way, would not be allowed to exist in most other countries on earth.

How bad is it? Botox Babe Nancy faced DACA delinquents screaming at her during a Town Hall where she intended to soothe the malcontents with words of assurance that Democrats had their illegal backs. If you haven’t seen the video take a minute and check it out:

Those are not poor little children. Those are wretched, spoiled, law-breaking ingrates who collectively deserve an ass-whoopin’ and to be sent packing with their respective illegal parents.

Pelosi put up with them because the Democratic Party desperately needs their vote.

The bottom line is, the likes of Pelosi and Schumer and the rest of the Lefty Crew will side with illegals over legal citizens any day of the week.

They don’t care about Trump’s crumbs and whatever hardships Flyover Citizens endure.

The Left’s one and only goal is grasping and maintaining power, at any and all costs.

They, The Dems, care about their own scrawny necks and grabbing total control. Period.