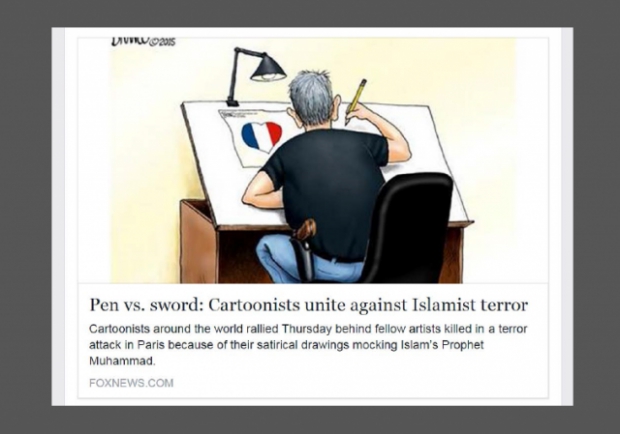 A.F.Branco cartoon makes FoxNews.com as part of an article relating to the Charlie Hebdo terrorist attack.

“Cartoonists around the world rallied Thursday behind fellow artists killed in a terror attack in Paris because of their satirical drawings mocking Islam’s Prophet Muhammad.

The late-morning attack Wednesday at the newsroom of weekly magazine Charlie Hebdo struck hard at the close-knit international community of journalists whose provocative pictures are aimed at challenging society, culture and politics. Four cartoonists who worked regularly at the Paris publication were among the 12 slaughtered, apparently because the magazine had published images of Muhammad in defiance of Islamic teaching. But cartoonists pointed out that Charlie Hebdo’s mission was pushing boundaries and exposing hypocrisy, and the publication ran images deemed offensive by Christians and Jews, as well.”

“It’s time for the west to wake up to this kind of thing and stop appeasing radical Islam.”- Antonio Branco, political cartoonist