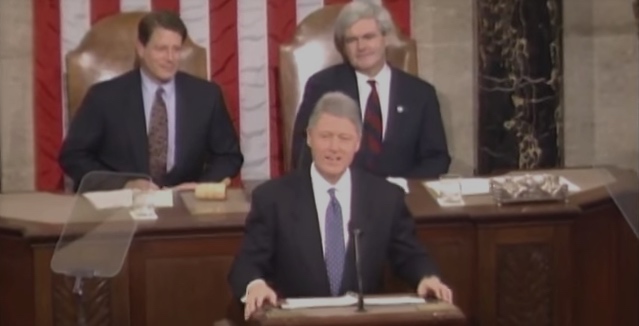 President Trump is receiving so much static for the very platform that won him the White House, and a major issue of his platform was related to illegal immigration and border security. Trump promised to build a wall, to enforce our immigration laws, and to stop the flow of illegals into the United States.

The Left is stroking out, calling him a xenophobe. Never mind that the wife he adores is herself a legal immigrant from Slovenia.

What is so frustrating and infuriating is the fact that not long ago all of these über Progressives (Socialists) voted for border security and immigration control.

And then there’s this. In his 1995 State of the Union Address Bubba himself was wildly cheered for virtually the exact same illegal immigration stance as Donald Trump.

There is a clip circulating from C-Span, but I thought it would be a nice touch to use the video uploaded by the Bill Clinton Library. The clip starts with the appropriate segment and you can listen ’till the end if you’d like, or just stop the video after the illegal immigrant comments. Ask yourself how Clinton’s comments sound any different than Trump’s stance?

Watch and be amazed!

All Americans, not only in the states most heavily affected but in every place in this country, are rightly disturbed by the large numbers of illegal aliens entering our country.

The jobs they hold might otherwise be held by citizens or legal immigrants.

The public service they use impose burdens on our taxpayers.

That’s why our administration has moved aggressively to secure our borders more by hiring a record number of new border guards, by deporting twice as many criminal aliens as ever before, by cracking down on illegal hiring, by barring welfare benefits to illegal aliens.

In the budget I will present to you, we will try to do more to speed the deportation of illegal aliens who are arrested for crimes, to better identify illegal aliens in the workplace as recommended by the commission headed by former Congresswoman Barbara Jordan.

We are a nation of immigrants.

But we are also a nation of laws.

It is wrong and ultimately self-defeating for a nation of immigrants to permit the kind of abuse of our immigration laws we have seen in recent years, and we must do more to stop it.