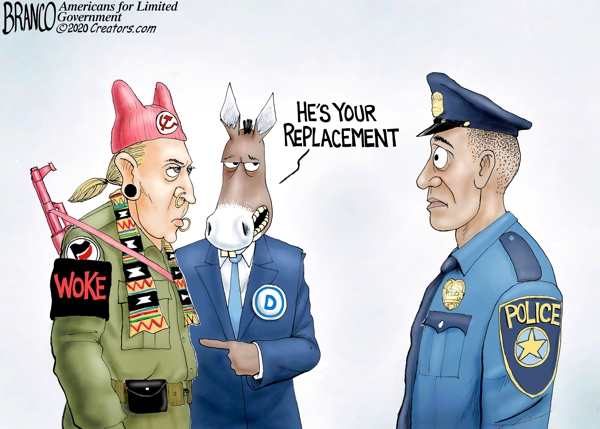 Facebook Twitter Pinterest Flipboard
Donations/Tips accepted and appreciated –  $1.00 –  $25.00 – $50.00 – $100 –  it all helps to fund this website and keep the cartoons coming. – THANK YOU!
The left is demanding the police be defunded, restructured, or replaced. Replaced with what? Political cartoon by A.F. Branco ©2020.
A.F. Branco has taken his two greatest passions, (art and politics) and translated them into the cartoons that have been popular all over the country, in various news outlets including “Fox News”, MSNBC, CBS, ABC and “The Washington Post.” He has been recognized by such personalities as Dinesh D’Souza, James Woods, Sarah Palin, Larry Elder, Lars Larson, Rush Limbaugh, and has had his toons tweeted by President Trump
Facebook Twitter Pinterest Flipboard
Tagged
AntiFaBlack Lives Matter

Taddeo: Elvira Salazar ‘a Threat to Reproductive Rights’
The Floridian

Ghislaine Maxwell: Something Fishy is Going Down
The Black Sphere