Jimmy Stewart on the Tonight Show — Funny and Patriotic! (Video) 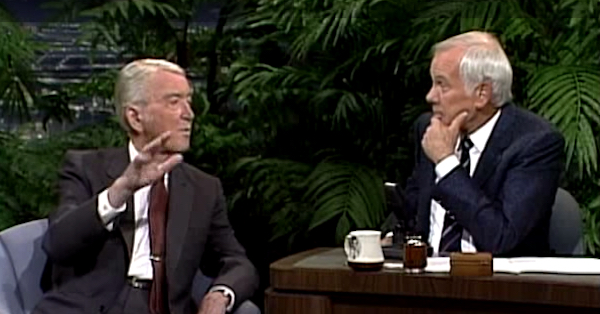 In this classic episode of the Tonight Show with Johnny Carson, Jimmy Stewart visits.

Now if some of you reading this are unfamiliar with Jimmy Stewart, he ranks right up there with John Wayne and Audie Murphy as an actor that loved America.

And like Audie Murphy, Jimmy Stewart served in the military. Here’s a slice of his bio which shows his daring-do and love of country:

While he was building his reputation as an actor, the rest of the world was about to go to war. German occupation in numerous countries in the early part of 1940 led Congress on September 16, 1940 to pass the Selective Service Bill, “the draft”, this bill called for 900,000 men between the ages of 20 and 36 to be drafted each year.

Stewart’s draft number was 310. When his number was called and he appeared at Draft Board No. 245 in West Los Angeles in February 1941, the 6’3” Stewart weighed only 138 pounds, 5 pounds under the acceptable weight level. He was turned down.

Stewart wanted to fly and serve his country but by May of 1941 he would have been too old [33] to get into flight school. He went home ate everything he could that was fattening and went back and enlisted in the Army Air Corps, he passed the physical with an ounce to spare. While others tried to avoid the draft, he actually wanted to serve in the military. Later he would actually campaign to see combat.

Jimmy was already a licensed pilot. Interested in aviation as a child, he had taken his first flight while still in Indiana from one of the barnstorming pilots that used to travel the Midwest. As a successful actor in 1935 Jimmy was able to afford flying lessons. He received his pilot’s license in 1935 and bought his first airplane. In 1938 he gained his commercial pilot’s license. He often flew cross country to visit his parents in Pennsylvania, navigating by the railroad tracks.

In the military, he was to make extensive use of his pilot’s training. In March 1941 at age 32, he reported for duty as Private James Stewart at Fort MacArthur and was assigned to the Army Air Corps at Moffett Field. To comply with the regulations of the Air Corps proficiency board, Stewart needed an additional 100 flying hours and bought them at a nearby field, at this own expense. He then took and passed a very stiff proficiency board examination.

In January 1942 Stewart was commissioned a 2nd Lieutenant. He was then sent to Mather Field in California as a twin engine instructor this included both the B-17 and B-24. Much to his dismay, Stewart stayed stateside for almost two years, until commanding officers finally yielded to his request to be sent overseas. In November 1943, now a Captain and Operations Officer for the 703rd Squadron, 445th Bombardment Group of the Eighth Air Force, he arrived in Tibenham, England.

In March of 1944 he was transferred to the 453rd Bombardment Group at Old Buckenham. While stateside, Stewart flew B-17’s (The Flying Fortress). In England he flew B-24’s (The Liberator) and did so for the remaining years of the war.

Stewart’s war record included 20 dangerous combat missions as command pilot, wing commander or squadron commander. He was awarded the Distinguished Flying Cross with two Oak Leaf Clusters, The Air Medal with three Oak Leaf Clusters, and the French Croix de Guerre with Palm. At the end of the war he had risen to the rank of Colonel. After the war he remained with the US Air Force Reserves and was promoted to Brigadier General in 1959.

Jimmy Stewart was a great actor and a great American, and funny to boot! His sense of humor and self-deprecating style is a tribute to his character and humility.

Oh for actors in Hollywood today who would emulate Jimmy!

Enjoy this video — it’s worth the time.