If You Had Just WON Hillary! 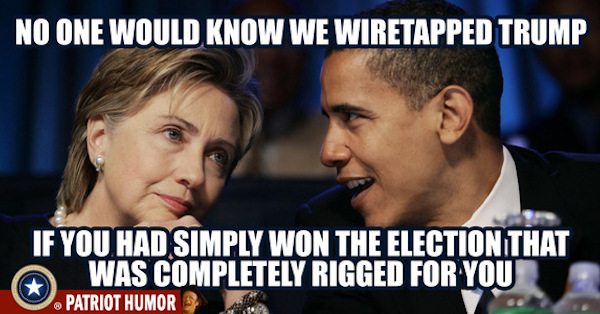 ROFL!!! The mighty forces of the Left — the DNC, the Mainstream Media, the education elites, Hollywood — they all were scheming and planning and even rigging the election for Hillary.

Ms. Clinton, facilitator and chief advocate of Bubba’s sexual escapades, was the presumptive winner, poised to crash through that supposed glass ceiling and cackle her way into the White House.

Slick Willy, aka Hill’s hubby, was drooling at the expected results and the opportunity to be the First Husband. Yeehaw! Lots and lots of young and comely interns and secretaries and almost no bothersome agenda to interrupt his multi-purpose cigar Olympics.

The Clinton Crime Family had minions organizing planned violence outbreaks at Trump events. Hill and Bill had the DNC Chair and temporary Chair stacking the primary against Socialist Bernie.

The Progressive Left (aka all the socialists and radicals) were gleeful, giddy.

Clinton’s campaign gala on election night looked like a Grateful Dead concert for Millennials. Everyone was ecstatic, waiting anxiously for the big, celebratory fireworks.

But alas, the only fireworks, or so it’s rumored, were that of HRC blowing a wine-laden gasket in her hotel suite.

Somehow Trump, the patriotic, and sometimes bull in a china shop clumsy, and all his unexpected millions of deplorables prevailed.

Like poor Casey at the bat, there was no joy in Mudville — er the Big Apple Hillary HQ — mighty Casey (Clinton) had struck out.

Wailing and gnashing of teeth took the place of fireworks. Champagne was set aside as Hillary’s nasty women wept and wondered would they have to dispose of their pink pussy hats instead of unborn babies?

And you just can imagine the fury in Obama, poised to make a comeback as the King of the World who paved the way for America’s New Queen.

Sometimes real life is even better than fairy tales.