Dems Warn of Cataclysmic Doom If The Memo Is Released! (Too Late) 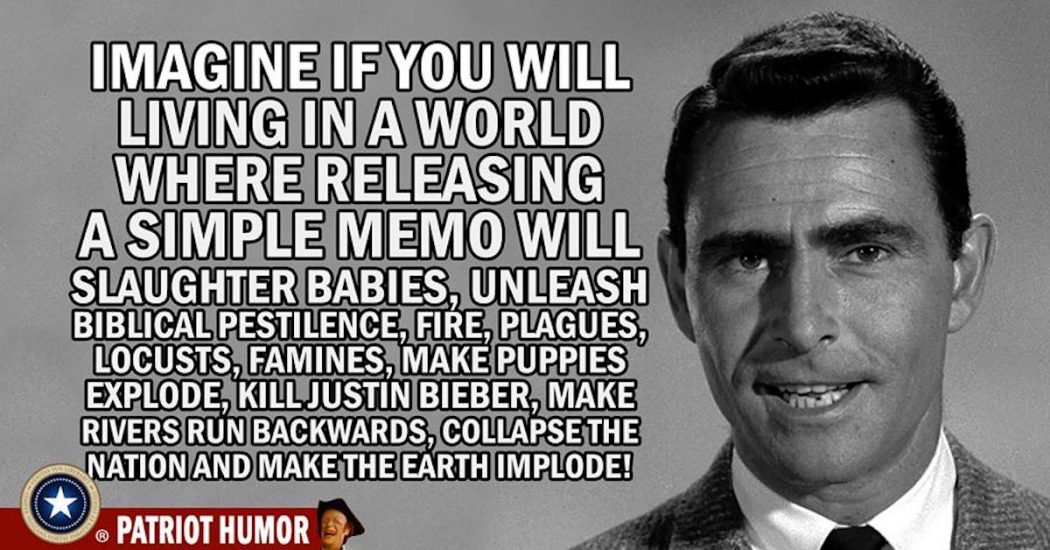 Leave it to our friends at The Patriot Post to create the perfect meme concerning The Memo.

The Dems warned of dire consequences if The Memo was released. Dire.

CNN, that bastion of conservative and serious thought…oh maybe not…reports:

Sen. Mark Warner, the top Democrat on the Senate Intelligence Committee, slammed the release of the memo, saying it was “reckless and demonstrates an astonishing disregard for the truth.”

“This will make it far more difficult for the Intelligence Committees to conduct meaningful, bipartisan oversight of intelligence activities in the future,” he said in a statement. “This action was also taken without regard to the damage it could do to our ability to protect Americans from threats around the globe.”

The intelligence community opposes this.

Even many Republicans oppose this.

This is dangerous territory, it disrespects law enforcement, and it's an alarming partisan attack on efforts to investigate hostile foreign interference in our democracy. https://t.co/kMVVhUQ35I

.@realDonaldTrump’s decision to declassify the partisan memo, made in cooperation w/ Congressional Republicans, is a dangerous attack on our justice system and the rule of law. Patriotic Rs & Ds must unite & defend the independence of @TheJusticeDept & @FBI. My statement: pic.twitter.com/8UCbL7ZHgL

This puts us in extremely dangerous territory. It upends the relationship between the intelligence community and Congress, threatening the ability for different branches of government to work together to protect the American people’s safety.

The memo should have been further reviewed because of its “implications for our national security.”

This model of bipartisanship and careful vetting would have been a far better way to proceed.

Yada yada. We got the picture. All hell would break loose and perhaps even the apocalypse if Americans actually read The Memo and saw the truth of who paid for fictional research needed for a FISA warrant to spy on the Trump campaign.

Hint: Those who thought Watergate was a big deal but are now saying “Nothing to see here. Move along.” are wrong. Evil even.