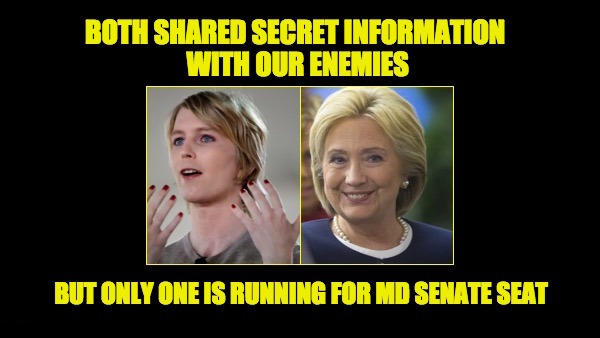 One of the last acts of President Barack Obama’s presidency, on January 17, was to commute the sentence of “Chelsea” (formerly Bradley) Manning—the former Army intelligence analyst who was convicted of releasing over 700,000 confidential files to Wikileaks. Manning came out as transgender, requesting to be called “Chelsea” and treated as a female, the day after being sentenced to 35 years in prison in 2013. Mr. Obama reduced the sentence to seven years, meaning that Manning will be released in May.

President Obama’s action was widely panned—even his own Defense Secretary, Ash Carter, said publicly that he opposed it. But Mr. Obama defended the commutation in his final press conference the next day by insisting that “the sentence that she received was very disproportional—disproportionate relative to what other leakers had received.”

And as for Hillary Rodham Clinton’s crimes, I wrote prior to her presidential run:

Hillary Clinton is circling the wagons and salivating over a presidential run in 2016: Hillary has accrued power and her life-long dream of being POTUS is nearing.

But not so fast Hillary. Take a look at the bodies mysteriously left in Clinton’s wake!

Each of these deaths seem to have had a cloud of mystery surrounding the event. In some cases, the victims were shot execution style, with firearms fitted with suppressors.

The public should be asking how common is it that a couple, such as Bill and Hillary, happen to know 47 people who died violent and mystery-shrouded deaths?

What else can be attributed to Queen Hillary?

If you think you can recall everything evil this woman has done, trust me. You don’t. Google “The Clinton Record” to review a nearly 11,000-word, blow by blow account of the devastation she has wrought.

Review Clinton’s nearly three decades in the public eye and try to remember a single apology for the horrible things she’s done. Benghazi wasn’t an anomaly. It was Hillary in action: deadly duplicitous, then doubling down with lies and personal attacks against those who had the audacity to call her on her sins.